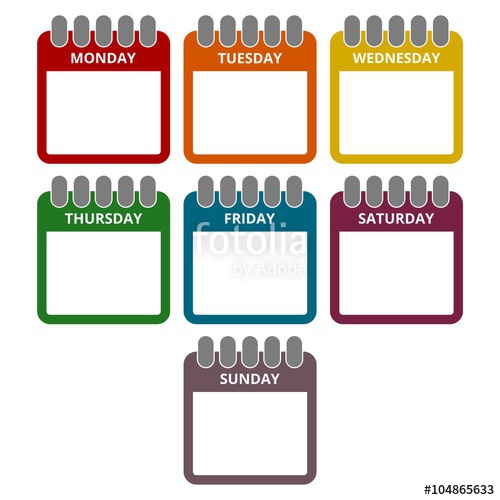 I’m not sure when I first noticed it (which is often the case when dealing with Sara) but Sara does not know the days of the week.  To be clear, she KNOWS the days of the week and probably still remembers the little song they taught her in Nursery School, but she has no idea what day of the week it actually is.  None.

This morning (Monday) she was getting ready for school and she asked what day it was – something she does multiple times a day lately.  Usually I just tell her (multiple times a day!) but this morning I said “Let’s try to figure it out.  Yesterday you didn’t have school…and today you do.”.  Nothing.  Confusion crosses her face.  So I break it down further “So… yesterday was the weekend, and today is the first day of the school week“.  Her face goes still and I can see that she is mulling this over.  The time ticks by and  I can sense that she is going to get frustrated so I prompt her further.  I say “Yesterday was SUNDAY…today is the FIRST day of the  five day school week”.  Nothing.  And now I worry that she is going to get frustrated and I do not want to send her off to school that way, so I remind her that if she is really stumped she can always refer to the whiteboard (on the wall beside her) for that information.   And she does and moves on without skipping a beat.

I can’t remember if it was ALWAYS this way or if this is a new difficulty?  It is clearly related to sequencing which is something that I think her Visual Processing Testing revealed she struggles with.  But I am trying to tease out if it is a new behavior?  I’m sure in the Summer she was unsure and I probably didn’t bat an eye – everyday is Saturday in the Summer!   Prior to that she was in Grade 6 and there was just soooo much we were learning about her struggles that I am not sure I would have noticed such a “small” thing.  However, I clearly had some idea because at one point I hung a whiteboard in the kitchen and used it to write out how the week looked for her.

As time went on I uncovered that the whiteboard works best if there was LESS on it.  So I started to only write the schedule for the current day. At some point after that,  I realized that she needed to have the actual day written on the top.  Now I have gone so far as to write the day and the date so that she is aware what month we are currently in.

And like everything else about her…it’s a quirky little deficit.  Sometimes she IS able to tease out what the day is.  She might realize that she went to Art class earlier and she only has Art on two days so she has a 50/50 chance of getting it correct.  Or she tethers “events” together and uses that info to make sense of the world. Every Wednesday she has Pathfinders in the evening.  And every Wednesday is a new episode of Survivor – which she has to miss because she is at pathfinders.  So now when she sees Pathfinders on the whiteboard she might start talking about how Survivor is on tonight and you are now under the false impression that she has a grasp of the days of the week.

Most of Sara’s deficits are compensated in clever ways and often her teachers are shocked to hear that she struggles so much because it isn’t always in line with what they see.  I have taken to telling them if they don’t believe me just to ask her what day of the week it is and they will have the first hint at how confused she is on any given day.

So for now I will remind her what day it is (MULTIPLE times a day) while encouraging her to become independent in that area by using the strategies that I have put in place for her.